“I believe in my own obsessions, in the beauty of the car crash, in the peace of the submerged forest, in the excitements of the deserted holiday beach, in the elegance of automobile graveyards, in the mystery of multi-storey car parks, in the poetry of abandoned hotels.” JG Ballard

At the end of the 1990s Croatia, then Yugoslavia, had its own four-to-five star luxury resort.  Penthouse owner Bob Guccione, together with the Yugoslavian fat cats behind Brodokomerc, commissioned architect Boris Magasto to build a decadent’s playground in Malinska on the island of Krk. Tito wanted to show how far he had broken from the stranglehold of the Soviets. Yugoslavia had opened its borders to foreign visitors by taking away Visa restrictions. Fiat had already moved in. Europe needed somewhere new to party and the unspoilt Adriatic coast was primed to have money poured into it.

The mile-long Haludovo Palace hotel complex opened on 15 June 1972 to a huge fanfare. It had hanging gardens, lavish pools, expensive mid-century furniture, fountains and Penthouse ‘pets’ employed by the resort as hostesses who Guccione himself promoted as the ‘new soldiers of the Cold War’. 100 kilos of lobster, 5 kilos of caviar, and hundreds of bottles of champagne were said to have been consumed each day by resort guests including heads of state Olof Palme and Saddam Hussein.

While the wealthier guests enjoyed the opulence of the hotel, down to a swimming pool filled with champagne, the hotel’s backbone of middle-class foreign tourists, did not spend half the money the hotel was expecting to make from the casino and because Yugoslav citizens were forbidden entry by the government they had no local clientele either. So after a year of overspending in a spectacular fashion, to the tune of 45 million dollars, Guccione declared himself out. 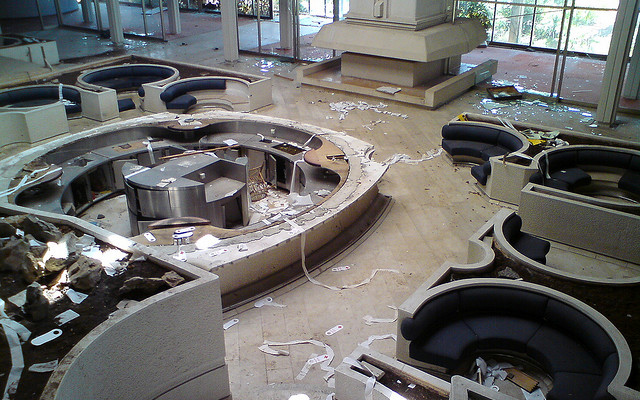 For the next 20 years, Haludovo carried on without the pornmonger as a worker-run enterprise backed by Brodokomerc. The company that had been so eager to go to bed with Guccione on the project now discarded the Penthouse label but remained a high-end resort right up until communism ended and Croatia had its War of Independence. Because war kept tourists away the complex became housing for refugees. The complex was later privatised and run badly by first a Cypriot company and then an Armenian diamond merchant turned hotelier. Now all that is left of its former glory is a vandalised shell.